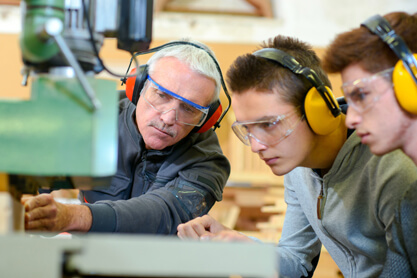 Can the New Apprenticeship Levy Rebuild the Construction Industry?

Can the New Apprenticeship Levy Rebuild the Construction Industry?

From 6 April, employers will need to pay 0.5% of any annual wage bill over £3 million into a government scheme to help rebuild the UK’s apprenticeship system and address the looming skills shortage. The plan is certainly ambitious, and it needs to be. Over the last few years many concerns have been raised about the quality and quantity of apprenticeships being undertaken, and as the construction industry continues to clamber out of its deep recession it has found itself without the necessary talent coming through to safeguard its future. The government had to do something, and the new apprenticeship scheme is their solution. But will it work, and will it help the construction industry attract the volume of talent it needs?

Few would disagree that the apprenticeship scheme was in a bit of a mess. The number of apprentices in comparatively low-skilled sectors such as retail, business and management is far greater than in high-skilled industries like IT, engineering and construction. According to a 2012 report by the Royal Academy of Engineering, by 2020 the UK will require approximately 450,000 new science, engineering and technology technicians. The recruitment of suitably qualified technicians in these fields is expected to fall well below this level, and this huge skills shortage – as well as a desire to create a high-skilled economy – were the driving factor behind the introduction of the new Apprenticeship Levy.

And it gets worse for the construction industry. A report on apprenticeships by framework produced by the Skills Funding Agency indicates that construction is 8th on the list, well behind the likes customer service, hospitality and catering, business and administration, management, retail and health and social care. This demonstrates a strong preference towards more business-related opportunities, and more and more people are turning to careers in health care and professional services rather than more traditional artisan trades.

The gradual shift from an industrial to a service economy is only part of the reason why so few apprentices view construction and engineering as viable career paths. It is also, in part, an unintended consequence of the way the apprenticeship system was set up. Training providers were incentivised to focus on promoting shorter, easier courses in order to ensure they received the apprenticeship payment. And it’s only by breaking this link between a government-funded system and the apprenticeship system that we can address the UK’s technical skills shortage and encourage more people to pursue a career in construction.

How Will the New Apprenticeship Levy Work?

From 6th April 2017, all employers will pay 0.5% of any wage bill over £3 million into the government’s new apprenticeship service, which will help to cover the cost of apprenticeship course fees. Companies will be able to access the funds they have paid into the scheme through a new digital account, which can be managed via the Manage Apprenticeships website. The government will top up the amount paid into the account by an additional 10%.

Companies that employ more than 50 people but don’t pay the apprenticeship levy as their annual wage bill is below £3 million will need to pay 10% of the training costs of each apprentice they decide to take on. Small businesses that have fewer than 50 employees will pay no cost towards training an apprentice under 18 or aged 19-24 – providing the cost of the training is within the maximum funding band.

An in-depth guide into the new apprenticeship scheme can be found on the CITB website.

A high-skilled, flexible workforce is critical to the UK economy and international competitiveness, and the government’s commitment to rebuilding the country’s construction industry infrastructure through professional and technical education is commendable. The new apprenticeship scheme has the potential to lay the foundations for a high-quality apprentice system in the UK and provide the desired quantity and quality of construction apprentices the industry desperately needs. One, national apprenticeship levy funding all apprenticeships could also result in a system that is simpler and easier to implement for businesses that operate across multiple sectors.

There are concerns, however, as well as some opposition to the new scheme. A recent poll of senior decision-makers by City & Guilds revealed that 33% of UK employers that had an annual wage bill of over £3 million and were, therefore, eligible to pay the apprenticeship levy were unaware of its existence. Even more alarmingly, almost a quarter of heads of apprenticeships were also unaware of the new system.

“The lack of awareness is a cause for concern and shows that we still have a hill to climb in convincing people about the benefits apprentices can bring to business,” said Kirstie Donnelly, managing director of City & Guilds.

“While the overarching principles of the levy and delivering apprenticeships are relatively straightforward, the contractual relationship between the SFA, employer, provider and learner is significant,” said Mark Dawe, chief executive of the Association of Employment and Learning Providers. “This guidance makes clear that the funding is government money with government requirements.”

“There’s a real concern about how organisations will fund apprenticeship salaries and training,” said Sue Evans, head of HR and OD at Warwickshire County Council.

“The government has taken a slice of our budgets in order to pay the apprenticeships levy, but many will not be able to recoup it because they can’t hit the targets that have set. So organisations will simply create apprenticeships out of their existing workforce, which is a dodge to get the money back, and not in the spirit of apprenticeships.

“Ultimately, the apprenticeship levy is badly thought through and, although the mechanism to remove money from employers is now in place, the mechanism for us to recoup it is still not ready. The demoralising thing is that we have been talking to the government for a long time about our concerns and the unintended consequences of the levy, and they have not listened.”

Arguably the biggest barrier to success for the new apprenticeship levy is, as is so often the case, the cost of the scheme. Numerous business groups have raised concerns about the true nature of the levy, with many viewing it as simply another tax being introduced at the same time as other measures including a higher National Living Wage and new reporting requirements on gender pay.

Neil Carberry of the Confederation of Business Industry (CBI), said: “For the levy to be a success, it must deliver long-lasting careers and close skills gaps, not just create more apprenticeships.

“As it stands, there is a genuine risk that firms aren’t going to be able to use their funds if the system does not deliver the training apprentices need.”

Meanwhile, Trade Union Centre’s (TUC) general secretary Frances O’Grady said: “It’s good news for workers, who will have more opportunities to gain the skills needed for better-paid jobs. And it’s good news for businesses as their productivity will improve with a higher skilled workforce.

“The Government must now look at ways to make sure that all apprenticeships are of high quality. And we need action to improve access to apprenticeships for groups of workers including women, disabled people and black, Asian and minority ethnic workers.”

It’s vitally important that the new levy and CITB levy are fully differentiated or combined in such a manner that is transparent and offers employers genuine value for money. Failure to do so may lead to the general perception that apprenticeships are too expensive to implement. And if that happens, it could spell the end of the scheme before it has even begun.

The UK government’s determination to create an additional three million apprenticeships underlines the importance of vocational training as a route to employment. However, as well as setting ambitious recruitment targets, we must ensure that the standard of apprenticeships is of the required quality to have a real and positive impact on the industry.

Early Awareness is Crucial to the Success of the System

Apprenticeships offer a fantastic opportunity for young people to acquire the skills and experience they need to thrive in employment and, along with work experience placements, they are often the first taste of a real working environment that young people have had. However, a number of surveys show that relatively few teachers advise their pupils about the benefits of undertaking apprenticeships; in some cases, students are actively discouraged from pursuing apprenticeship options in favour of a more traditional, educational route into employment. The Edge Foundation’s survey of 18-33-year-olds in employment found that of those who followed a vocational path, 26.5% claimed their school actively discouraged their decision. The survey also revealed that only 7% of existing apprentices were encouraged to pursue an apprenticeship by their school or college.

In order to improve awareness of the enormous benefits that apprenticeships offer – both for employers and prospective employees – teachers need to be aware of the benefits themselves. By raising the level of understanding and knowledge of apprenticeships across the educational sector, teachers and other educational professionals will be in a better position to provide impartial advice about high-quality apprenticeships and technical degrees, as well as the more traditional academic routes to university. Apprenticeships should be considered a key route to further education and be fully signposted to pupils and parents.