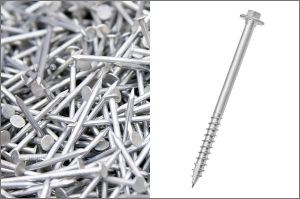 Screws v Nails: Which should you use?

Both Screws and nails have played a major part in construction for many years and there is, and perhaps always will be, some disagreement regarding when to use each type of connector for certain tasks.

As construction has evolved to meet modern day requirements, so too have both have screws and nails – but when does one favour use over the other? Screws and nails are designed to resist two types of load: shear and withdrawal.

Shear is the force that wants to slide the pieces being joined apart.

Withdrawal is the force that wants to pull two members apart. For example, when you hook on to a nail with the claw portion of your hammer and apply a prying action, you are subjecting the nail to withdrawal.

Nails are usually preferred when there is a shear force at an interface (or possible interstice) between two or more joined materials, as nails are able to resist shear force and have a slightly quicker application.

However screws have a superior resistance to nails when exposed to withdrawal force, and as such may be preferred to nails. For example, when a connector is required to fasten deck boards to a sub-structure, over time the boards can sometimes warp and lift away from the substructure. If nails are used they can often lack the resistance to stop the withdrawal force of the lifting board; whereas screws are far more able to prevent the lifting force of the boards.

The method of pre-drilling can often be a relatively messy and time-consuming process and as such ,some tradespeople can favour nails. OSC, however, have a huge range or self-drilling screws that simply cut out the additional step when fastening two materials – instead, the screw acts as its own drill bit, creating the perfect connection every time.

When deciding upon either screws or nails, another favourable attribute of screws is their ability to be easily removed and reapplied – so if a project is subject to change, screws provide a level of flexibility and convenience that nails are unable to rival. Tools such as nail guns can provide the operator with an effective device to speed up construction methods, but when a more accurate application is required, screws are again preferable. With the sharp points of self-drilling screws, this type of fastener is perfect for placing directly into the exact desired point of contact with ease and precision.

Finally, screws are perhaps a less destructive option when working on a project that requires more finesse as the continual banging and vibrating of nails being hammered can be too forceful. Instead, self-drilling fasteners can be smoothly and cleanly applied with an electric drill, with minimal disturbance.

Screws or nails may always be a matter of preference for some tradespeople, but both are clearly indispensable in many areas of construction. If you decide screws are the connectors you need for your next project; whether it is carpentry, electrical work or any other aspect of construction that requires quality fasteners, OSC has a huge range to meet the requirements of almost any job. From Heavy Duty Electricians Screws to Stainless Steel Hex Head Screws, our range of self-tapping screws and self drilling-screws have all been precision engineered to meet the requirements of modern construction.